The role of education in the healing process in Rwanda

In the 20th Century Rwanda was characterized by divisionism along the lines of the so-called ethnic groups, which culminated in the 1994 genocide against the Tutsi. In addition to taking many innocent lives, the genocide left a lot of wounds in the hearts of many Rwandans especially the genocide survivors and tore the social fabric of the Rwandan society into pieces. After stopping the genocide, the new government committed to never letting this happen again and to rebuilding the country in all the spheres of its life. A key part of this was facilitating the healing of the broken hearts of Rwandans as a “process aiming at the reduction of the suffering from past experiences” (Never Again Rwanda & Interpeace, 2015, p. 11). This is because, as Ryarasa Nkurunziza (2016) explains, the effective rebirth of a nation depends on the successive healing of individuals and also communities within the broader society. As AEGIS (2017, p. 13) points out, “unhealed historical wounds and trauma can be transferred from one generation to the next, creating the danger that violence will be repeated.”

One instrumental tool that has been used to achieve this is education because, as Espina-Varona (2018) suggests, education can help to heal both personal and national trauma. Thus, the post-genocide “education policy promoted national unity and reconciliation, prioritizing equity of provision and access, and encouraging a humanitarian culture of inclusion and mutual respect” (Obura, 2003, p. 18). It is worth noting that as much as education can be used for healing it can also be used for hurting. This happened in Rwanda where divisionism was encouraged by the education system prior to 1994: learners were labeled according to the ethnic groups they supposedly belonged to and admission in secondary and tertiary education was based not on merit but on ethnic and/or regional membership. Curricula and teaching and learning materials contained stereotypes leading to the marginalization of certain groups of people in the different areas of society.

To reverse this situation, the new government made education accessible to all Rwandan children, irrespective of their social, economic, religious and so-called ‘ethnic’ backgrounds. Education therefore became a basic right for all the children of Rwanda because it was known that limited access to education, along with other daily stressors, coupled with exposure to violence could lead to mental health challenges (Lauren, Ahishakiye, Millera, & Meyerowitza, 2015). In addition, according to Never Again Rwanda & Interpeace (2015), lack of education is reported to pose a threat to healing while access to education is said to bring hope to youth and to their parents.

At the policy level, the national school curriculum had to be revised in order to reflect the purpose of healing the society through education. For example, the 1998 Ordinary Level English curriculum stated that “English is to develop the spirit of dialogue, promote tolerance and the culture of peace” (National Curriculum Development Centre, 1998, p. 2). In the more recent competence-based curriculum, which was introduced across all grades in 2016, one of the major shifts was the new emphasis on skills: critical thinking, empathy, personal responsibility and trust were strengthened through more interactive teaching methods. Peace and values education and genocide studies were included as crosscutting issues to promote

social cohesion, positive values including pluralism and personal responsibility, empathy, critical thinking and action in order to build a more peaceful society (a society that does not use violence to resolve conflicts) and acquire values and knowledge, and developing attitudes, skills and behavior to live in harmony with oneself, with others and with the natural environment and fighting genocide ideology and genocide denial (Rwanda Education Board, 2015).

This shows that education has been and is still intentionally used as a tool to heal the hurts in Rwandan society at large and in individual victims of the sad history that Rwanda went through. As Ryarasa Nkurunziza (2016) indicates, every wounded society needs to search for solutions from within itself, taking into account its particularities and the nature of the violence that transpired. Education has been allowing young Rwandans to look into their society and find solutions to their problems and adopt approaches that emphasize the importance of valuing each other and treating each other with dignity.

The promotion of a culture of peace and positive values is reflected in the content of teaching and learning materials such as textbooks. For example, the Ministry of Education has decided to “teach children the elements in their history which are not divisive but, on the contrary, unifying” (Obura, 2003, p. 18). Such content helps learners to reflect on their history so as to live in peace and harmony with themselves and with others. Classroom practices had also to be shaped by the approaches which help in the healing process. For example, through its HEART (Healing and Education Through the Arts) program, Save the Children helped children affected by serious or chronic stress find new ways to share their feelings and experiences through painting, music, drama, and many other art forms1Retrieved from https://www.savethechildren.org/us/what-we-do/global-programs/protection/healing-and-education-through-the-arts, on 14th February 2019..

In order for classroom practices to reflect of this aim, educational leaders, teachers and parents themselves had to be helped to heal because they were expected to help others develop professionally while they had also been wounded. Thus, they had first to heal and understand how to help those who have been wounded. This is why, at the beginning of its program activities, the Wellspring Foundation for Education provided personal development workshops to its staff and school leaders. At the beginning of Wellspring’s School Development Program (SDP) training activities, the beneficiaries indicated that the training had been useful in their healing and that of the community at large. Teachers indicated that their eyes had been open to the impact of negative behavior management strategies such as corporal punishment, which could hurt children even more. Some school leaders got to understand their teachers, accept them as they are, shaped by their histories, and help them accordingly. Others indicated that their relationship with teachers had been transactional but after being trained on servant leadership, they now love and care for their teachers.

Some parents indicated that Wellspring’s workshops and trainings helped them not only to support their children’s education but also to have healthier families. For example, after being trained on the “Foundation of good parenting” Module, one parent, who had started a divorce process understood that she was building on sand and that the future of her family was not secure. As a matter of fact, her children had already dropped out of school. Thus, she took the first step and went to see her former husband and explained to him how none of the two was benefiting from the decision they had made. This brought him back to his senses and they started a reconciliation process which culminated in their reunion. The latter was a memorable event for the whole village: their families, which had been antagonistic towards each other and had been behind the divorce, got along well again and children went back to school, among other changes. Their story is now used as an example to indicate that healing and reconciliation are possible.

Never Again Rwanda and Interpeace (2015) point out four healing approaches which have been used in Rwanda: group approach, holistic approach, community approach and individual approach. It also outlines the tools used under each approach. A close look at these suggests that the group approach, of which the focus is on “minimizing isolation to the extent that group members often feel like members of a family” (p. 28), aligns best with education. The tools used in the group approach are story-telling, testimonies, sharing of social emotion, peace education, active listening, drama, theatre, film screenings and discussions, prayer, socio-economic based activities, home visits, reformulation, acknowledgement/giving value to group ideas, meta-communication and emotional management skills. The educators who went through this process testify that these workshops were very useful in healing them and in helping them to help their learners and neighbors to heal. For example, one participant said, “we learned that a true human being needs to be at peace with oneself and others. And that really touched my heart. I realized I was going the wrong way” (Never Again Rwanda & Interpeace, 2015, p. 11).

All of the above tools have found their way into schools through classroom practices and teaching approaches in all school subjects in different ways with the main aim being to enhance unity and cohesion among learners. Outside of the classroom, unity and reconciliation clubs and anti-genocide clubs have been created in schools which have allowed learners to express themselves, to talk to one another about their own ‘histories’, to learn about the genocide against the Tutsi and to explore how best to live in its aftermath. These practices have helped and continue to help learners to make peace with their past and with themselves so that they can reaffirm their identity and step confidently and peacefully into the future. Indeed, as part of the process of healing the wounds from the past it’s vital to allow the young generation to examine the past, however much pain it evokes, to acknowledge it, understand it, and above all, to transcend it together (Ryarasa Nkurunziza, 2016).

A summative evaluation of the Rwanda Peace Education Program which used a participative and interactive methodology (July 2013-January 2016 – Aegis) indicated that the impact of education in healing reaches parents through their children. For instance, one district official explained: “students see the photos, they read the testimonies, and they understand the importance of promoting peace. Most importantly, these children are influencing their parents!” (Naughton, n.d, p. 16). Today, genocide survivors and convicted genocide perpetrators work together in cooperatives and children with parents from both of these backgrounds go to visit and help genocide survivors and prisoners together. A few years ago, some of these people would not feel comfortable to see each other’s faces, let alone work together. There is no doubt that education has played a significant role in these achievements as many of these people testify.

Click here to download The role of education in the healing process in Rwanda as a PDF.

They make the intangible tangible. Every person we work with has their own unique story, and every one is worth sharing. 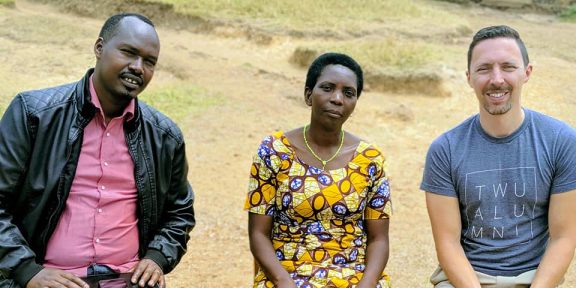